When you consider the fact that Las Vegas and Monte Carlo are two of the biggest and best gambling destinations on earth, it should come as no surprise that they also appear on the list of the oldest gambling venues in the world that are still open to players sometimes hundreds of years after they were built.

As convenient as it may be to be able to play slots for real money at https://australianslotsonline.net/ from the comfort of your own home, there is something to be said for touring these incredible destinations, too!

The Casino de Monte-Carlo, in Monaco

The Casino de Monte-Carlo is owned and operated by the Société des Bains de Mer et du Cercle des Etrangers à Monaco, and the main building dates back to 1863. In 1873 it became the only casino to still be operating in Europe!

The Casinò di Venezia, in Italy

The Casinò di Venezia is not only the oldest gambling venue in Italy but the oldest one in the world as well! It has been around for almost 400 years now, having been built in 1638, which is truly astonishing. Moulded in the Renaissance style, it is located in Veneto’s, or Venice’s, Cannaregio Quarter, on the Grand Canal. The best way to approach it is, of course, by gondola, or on a water taxi.

This beautiful building was initially called the Ca’ Vendramin Calergi, and served as a home and an escape for several prominent personalities in the course of its history, including the composer Richard Wagner. Once owned by several noblemen, the city of Venice purchased the Casinò di Venezia in 1946. They then renovated it and reopened it for players the world over to enjoy once more in 1959.

Situated in Las Vegas’ city-centre, on the corner of Fremont and Main streets, the Golden Gate Casino is one of the oldest establishments in Nevada. John F. Miller purchased the property in 1905 for US$1 750 and it opened its  doors a year later. The gambling games on offer operated from within the hotel until a state-wide ban came into effect in 1909.

It reopened when Nevada once again legalised gambling in 1931, but under a different name, operating as the Sal Sagev, or Las Vegas spelt backwards. Just 20 years later the property got rechristened once more, becoming the Golden Gate Hotel and Casino.

Being 10 storeys high and four blocks long, the party-potential for this space has not been untested, and it has become famous for the soirées that have unfolded behind its doors. Visitors are advised to try the legendary shrimp cocktails here too, made according to a recipe that is almost 60 years old now. 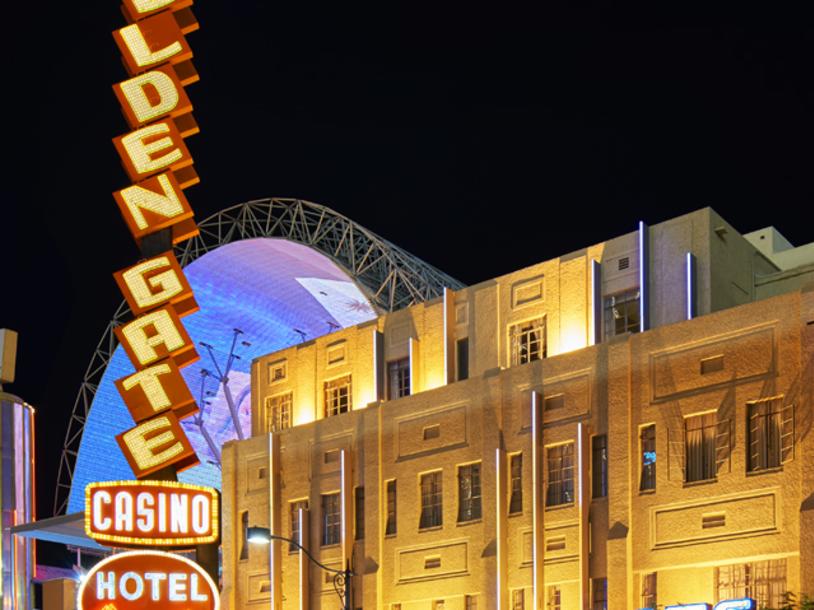